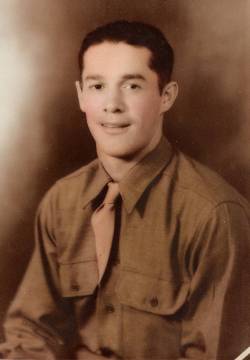 Enlisting in the United States Army on November 16th, 1942, Anton’s brother John served in the European Theater with the 95th Infantry Division, 377th Infantry Regiment.  The photo below shows him riding in the back of a jeep taking aim at the photographer with his M1 rifle.  The division’s earned the nickname “Iron Men of Metz” and the regiment formed part of the famed “Task Force Bacon”.  Better known to our family as Uncle “Dan”, he likened himself to legendry baseball player Danny Taylor.  He also survived the Battle of the Bulge.  He was discharged on December 7th, 1945, 4 years to the day from the attack at Pearl Harbor.  Like his brother Anton, he was a quiet man unless he was playing his accordion.  He always treated me like I was something special and although I only knew great uncle Dan in my early teens, I can still see his smile.  Private First Class Dan Povirk died in 1997.  He is survived by his wife Joy (Amy), whom I visited in 2004.  During that visit she handed me his Class A Jacket still adorned with his medals and ribbons.   I accepted the Jacket with honored and pride.  How blessed I am to be able to display his wartime photos and medals once again.

3 years and 21 days in the service of his country. 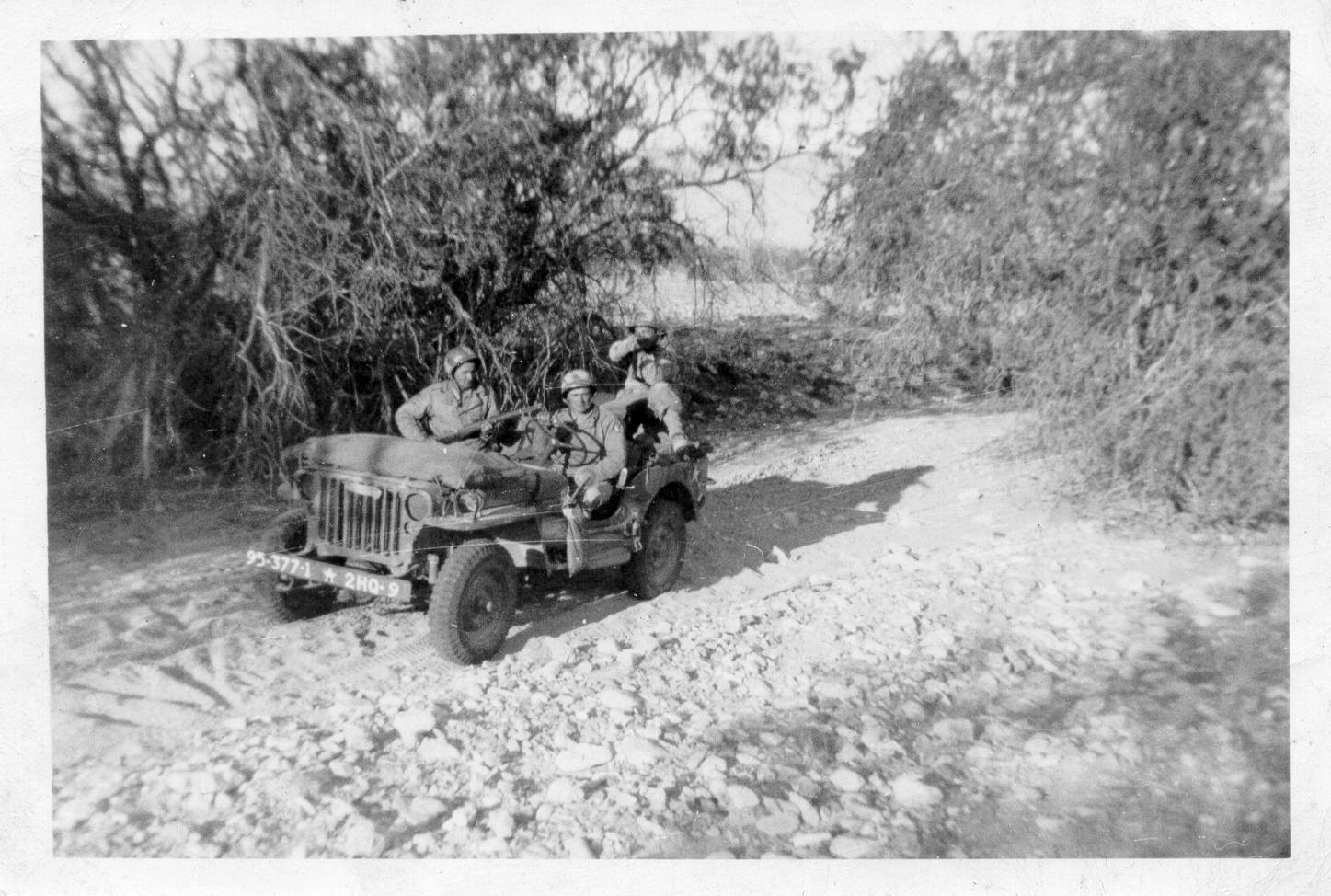 Somewhere in California Great Uncle Dan takes aim at the photographer.
Thank you Mat Gitzhofer for updating my information on this photo. 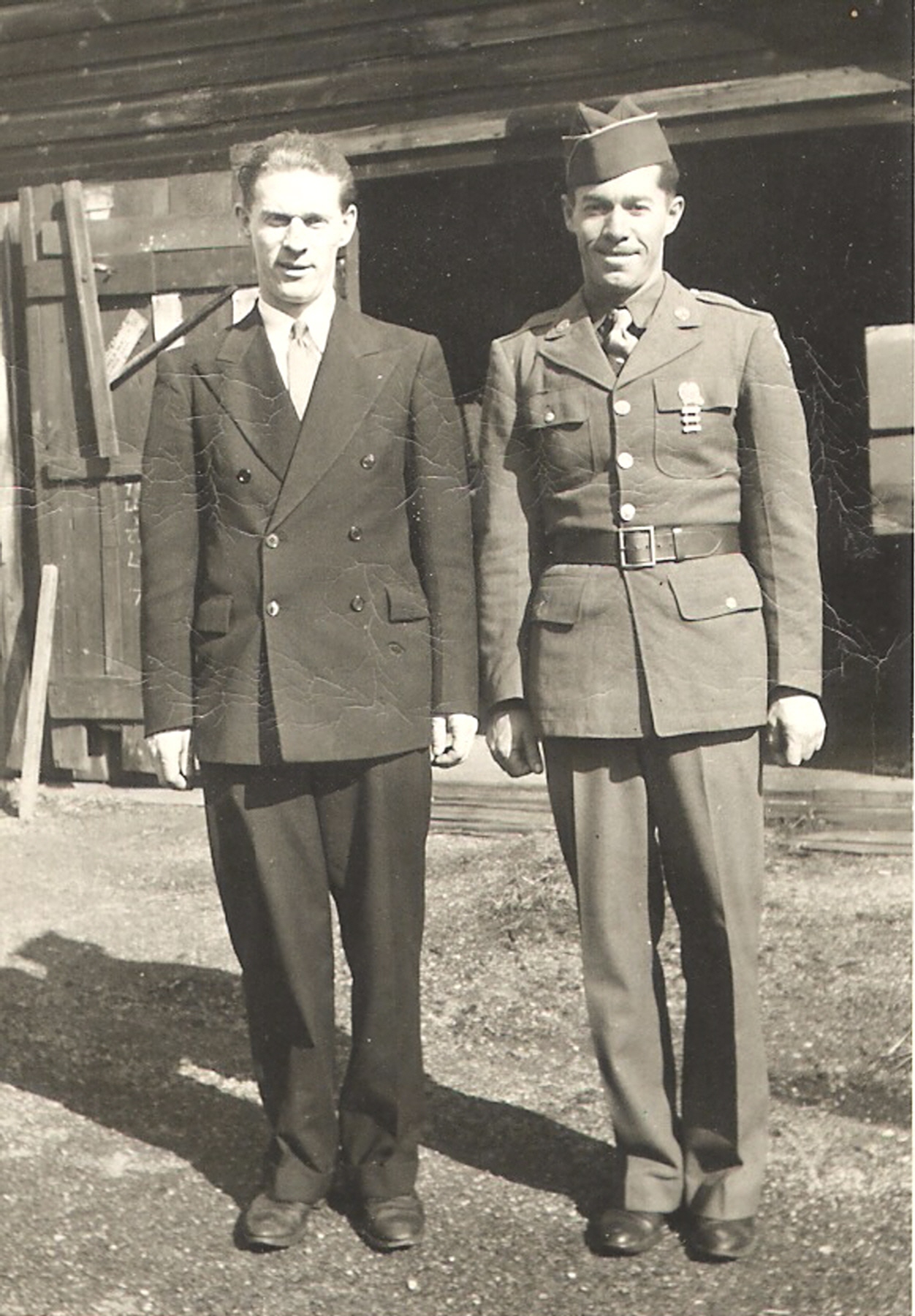 Uncle Dan enters the service and at home on leave with his brother and my grandfather Frank. 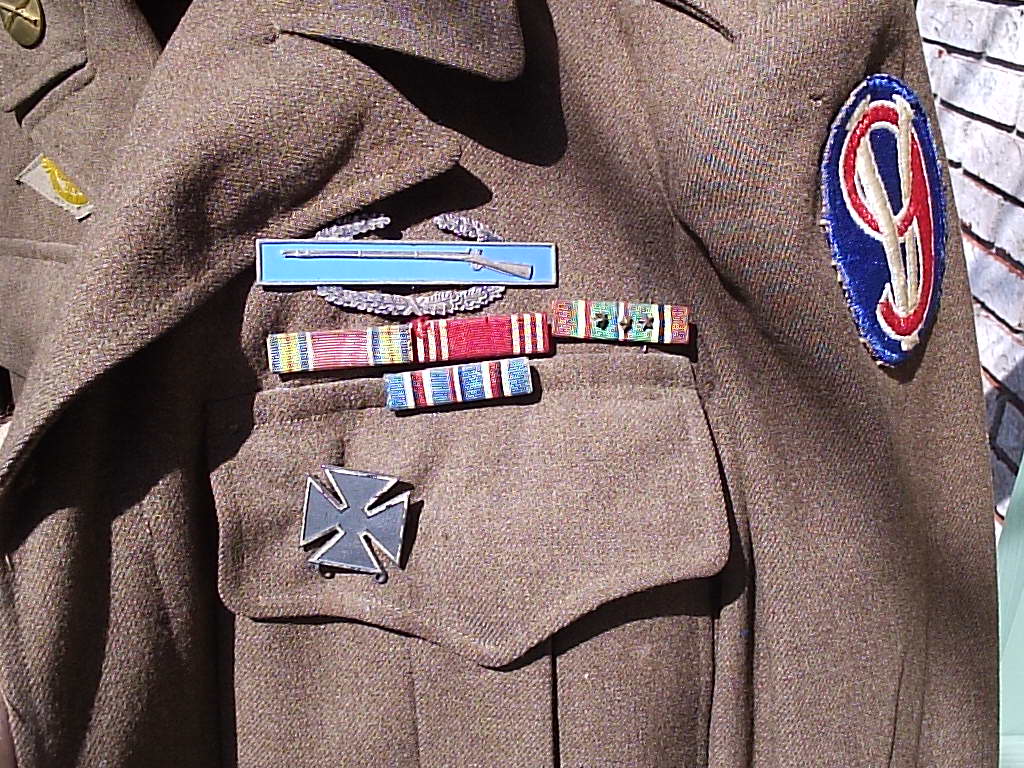 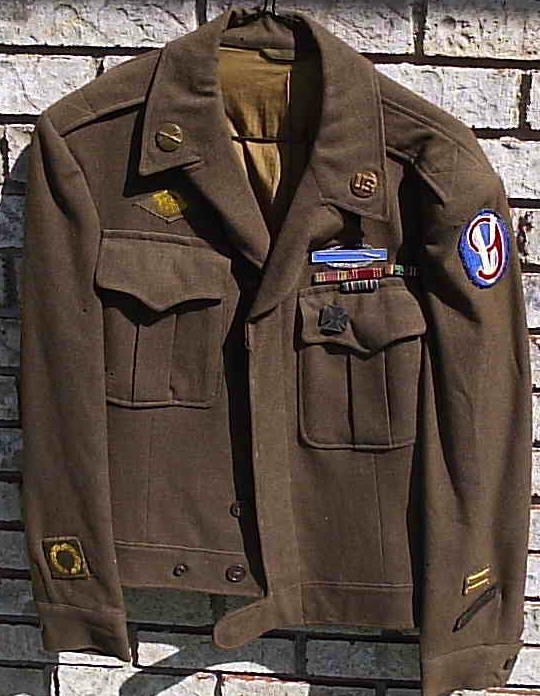 To me, this Jacket, torn, tattered, and ravaged by moths, is priceless. 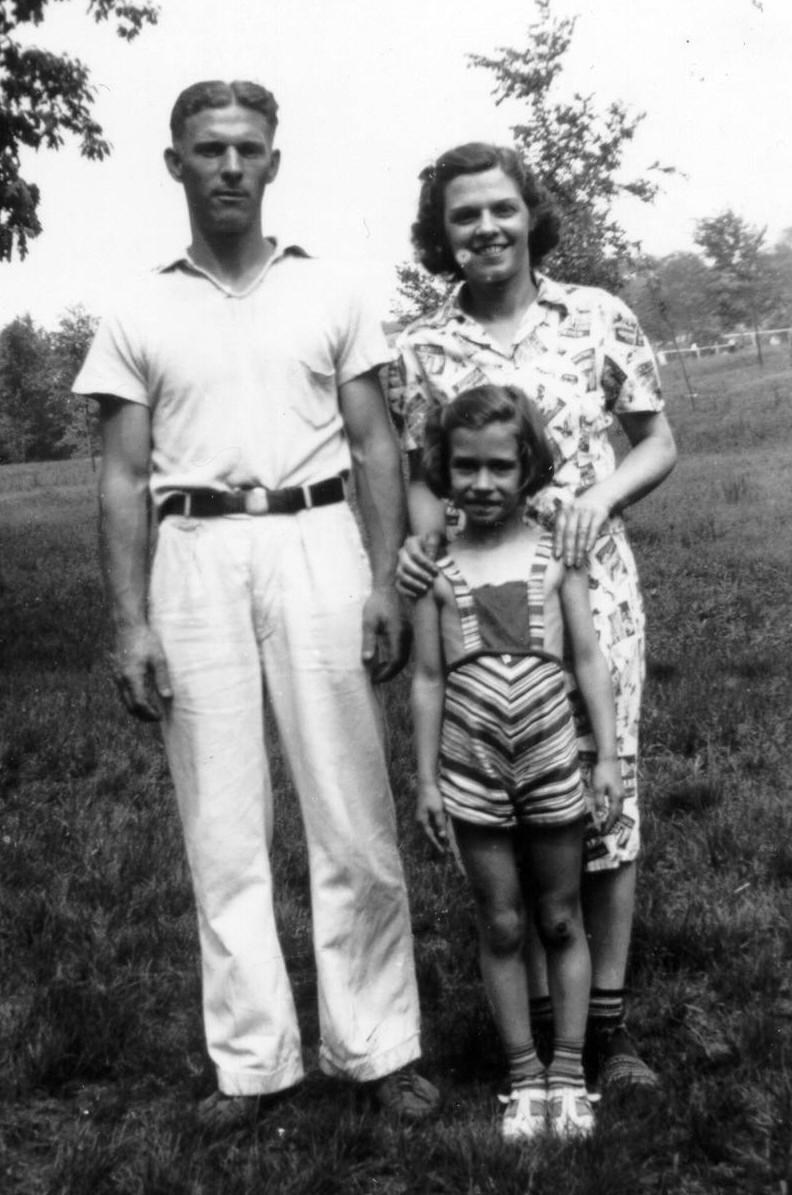 Grandpa Frank, Dan and Tuench's brother, with Wife Frances, Johnny and Frankie's Sister, and my mother in 1940.
Frank was 4F; Flat feet and never served.

A letter from my mother; Uncle Dan’s niece upon Dan's Death.

My Uncle Dan – “Always smiling and making little jokes”, as I remember him.  A handsome slender man, always neatly dressed, and hair combed just so.  Loved sports—especially baseball, which he enjoy playing with his brothers and friends back in his hometown of Collinsburg (Dutchtown) PA, when I was a little girl.

Dan served his country in WWII and found himself in NC and found his beloved Joy, a beautiful Southern, blue-eyed blonde, some 50 years ago.  I met her at Grandma & Grandpap’s where I spent each summertime.

A number of years passed and unfortunately we seldom met.  When Grandpap and Grandma passed away we were reacquainted.  Except for occasional telephone conversation, still with a light jovial laughter, we kept in touch.  We, my husband and I stopped briefly, as newlyweds to visit in April 1982 and again a few years later.  Then when his brother, my father passed away we met and stayed at Aunt Rosie’s, wife of his brother Anton (Tuench) in Irwin, PA.

Two years ago (1995) in July we again visited briefly while traveling thru Charlotte.  Already visible were the Parkinson’s signs making his weakness show.  We accepted cassette tapes to add to others he had sent prior of accordion/organ duets of him and my father which I treasure.  They truly enjoyed their musical get-togethers and I’m sure they will entertain in heaven above.  Our music is the only art form gift given by Heaven to Earth, and it returns from Earth to Heaven to praise our Lord.

Even tho my heart again feels pain, I know deep within that he is at Peace at last in reunion with his parents and brothers where they abide with our God.  And one day we too shall join all those we miss who reside in His Peace... Arlene (1997) 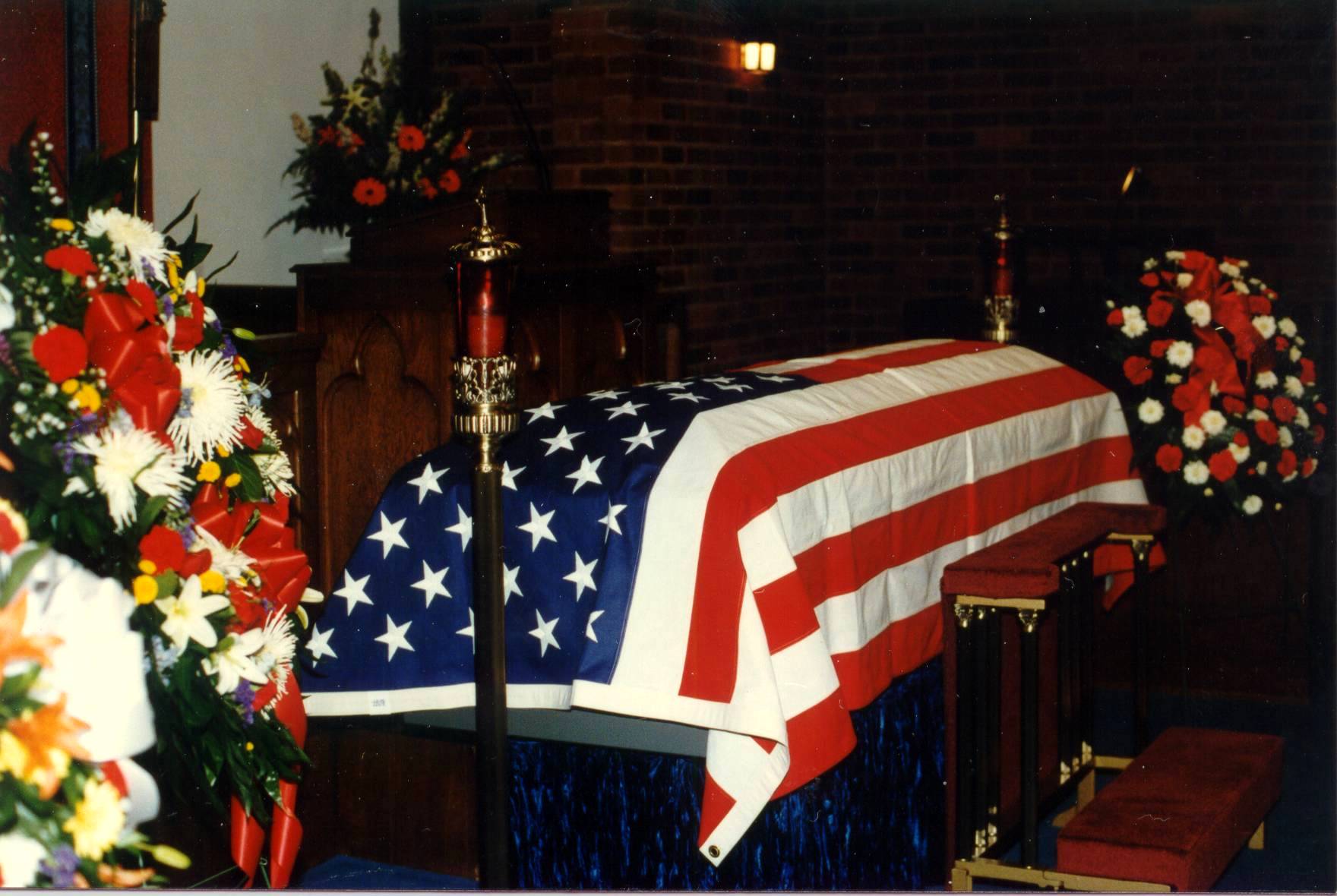 Funeral services will be held 10:30 A.M. Wednesday, May 14, 1997, at Hankins & Whittington Funeral Chapel.  The Reverend Robert J. Paquet will be officiating.  Interment will follow at 2 P.M in Guilford Memorial Part, Greensboro,NC.  Viewing will be one hour before the services.

Mr. Povirk was a son of the late Frank and Mary Ogrin Povirk.  He enlisted in the U.S. Army during WWII, weher he served in the 95th Infantry Division, Europe.  After the war, he worked for The Greensboro Daily News, and attended Greensboro College.  He later worked for The Lord Baltimore Press.

Mr. Povirk came to Charlotte in 1949 and was a supervising proofreader for 10 years with the old Charlotte News and then continued as a proofreader with The News and Observer.  He was and avid baseball and softball fan, and a former player.

The family requests, in lieu of flowers, memorial be directed to the Parkinson Disease Foundation or Friendship Trays, Charlotte.  Hankins and Whittington is serving the family of Mr. Povirk.

Rest in peace "Uncle Dan"
You will always be in my memory.